The 52-year-old, who works at Delamere CofE Academy, has just graduated from Liverpool University as a Doctor of Philosophy (PhD).

The mum-of-two is also a former Army Captain, is an Honorary Research Fellow at the University of Liverpool, and an author.

Now Dr Lorrae Campbell MA PhD, who is well versed at teaching letters to children, is acclimatising to having letters after her own name!

She said: “I haven’t used my new title yet, I’m really not sure that I will, but it’s nice to have it all the same and I’m proud of it.”

Lorrae qualified as a TA after a successful career in the Royal Logistic Corps and as a contract manager in industry.

She now runs archeology club at school and is currently helping her old supervisor write three books as well as a plan to turn her own thesis into a book later this year.

She said: “My undergraduate degree was in archaeology and ancient history and I went back to do my Master’s part-time over two years and really enjoyed it so I thought I’d go on and do a PhD.

“I thought it would be easy but it wasn’t! My husband, Ewen, jokes that it is a glorified hobby but it was really hard work and there were times when I wanted to crumple it up and throw it away but at other times it kept me sane. It was hard but it was worth it and I don’t regret any of it.

“My graduation day was fab! Only people who got PhDs were allowed to wear red robes – seven or eight amid a total of 167 at the ceremony. It felt like something out of Hogwarts!

Lorrae added: “It was volunteering on archaeological project for the Hill Forts of the Sandstone Ridge that got me back into archaeology, about 15 years ago, and I’m really pleased to get the chance to hopefully inspire interest in the subject in a new generation of children. I really enjoy working at Delamere, It’s a lovely environment for children to learn and a pleasure to be there.

“I give out an annual Indiana Jones Award for the student who impresses me the most in Archaeology Club – that is normally a very hard decision as we have some really enthusiastic young archaeologists in school! It’s lovely to help to fire their love of all things old!

NWAT CEO Steve Docking said: “At all our schools across Cheshire and Shropshire we promote and encourage diverse ways of learning inside and outside the classroom. Having talented and interesting members of staff, who have a wide range of experience and skills, is part and parcel of that and we are proud to have people like Lorrae as part of our incredible team.”

Rudheath Senior Academy pupils recognised for his contribution to the community 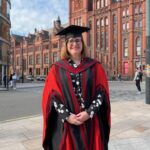